I do photoshop all my pictures, but there are so many ways to photoshop. It's not always about correcting your skin, it can be about something in the background(like someone photopombing you) oe the light is not that good. (White palance sucks) And ofcourse you want good cosplay pictures, so just because you a photographer, the pictures might need extra help. There is always some little things you might have forgotted to hide or fix. I dont see any reason to shame about it, and neither should you!

I got few pictures from my friends and i have permission to use them. I'm not a professional or i dont claim to be one.
Lets see what i have done. 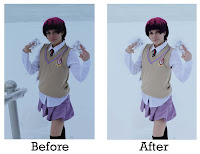 I edited the fence off, because it might looked like it didnt belong there.
I tried to take the blue/grey'is color off much as possible.
Made the colors pit more stronger

I hid the bold wig cap line.
Toned down the yellow color from skin
Fixed little pit the skin
Made the colors pit stronger

I hid the boob-tape
I hid the other eye(from a request. She sayd the eye looked pit crazy)
Made the colors stronger
Made some "shadows" around the picture for little atmosphere 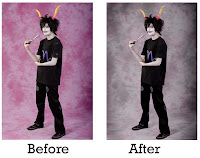 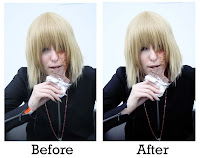 
And..the last one. I picked this one because..well..you'll see. I have this relly unique thing, that cant be removed by any lotion, or at normal skindoctor. Hard to tell now what it is, because i relly dont like talking about it. It is the ONE THING that makes me feel like i'm the ugliest person in the world. It can be fixed only with cosmetic surgery..and it's not free. So, before i have that mount of money do to so. I just have to pose with my other side, or....photoshop.

I dont think i have to tell you what i did..

And thank you Xiaxue who inspirited me to do this topic.

I think i will continue this ..thing. Sharing my mind about my own cosplay, telling what went wrong and those thing i like.

So, as you know i cosplayed Euphemia from Code Geass at Kitacon. It was kinda spontaneous idea. Back in 2008 i wanted to cosplay her, but for many reasons i didnt. To be honest, i havent watched this anime...well..some clips. I'm relly bad to watch anime these days. But i do know facts about the character. And the storyline plaaplaaplaa.

So, i had this old wedding gown in my closet, that i bough from flee.-market in 2010. Havent used it after it, and it had so much fabrig, i relly wanted to just..rip it in pieces and use it. Ofcourse i just used the "wrong" side of the fabrig, the less blingy side. The little jacked and dress has made from same gabrig. The violet/pink/what ever color that is is made from thinner fabrig, i would have wanted better fabrig, but i dont wanna use blingy fabrig, or baby pink that many euphemia cosplayers had used. I dont see it that way in pictures. And the only fabrig in vaasa and Kemi's fabrig stores was only that fabrig..and coloring would orcourse been ok too, but..that kinda pastel color is hard to get.

I did had to fix the jacket few times...but it still didnt come out as i wanted! I would had more time, but i wanted to help my girlfriend with her FIRST COSPLAY costume, so my mind was on that. I promised to help her, and i did.

The wig was borrowed from my friend Minna, i didnt have time to order mine. It's not the perfect color, but Euphemias hair color does change time to time..I will use this cosplay again at Desucon where we have group. But i will fix the problems and order my own wig.

I did compete! But no, i didnt win. And i'm okey with it, i didnt go to Kemi because of Kitacon. I was there because i havent seen my girlfriend over 4months, that was the main idea. I did like the winners, right reasons they won, buut.. i do have opinion and two about the judges. Even thou they choosed the right winners...I dont wanna sound mean or wiseass right now, BUT.. i think judges should be cosplayers. And i know one of them atleast had cosplayd sometimes, not so often. But what about the others? Just because they know what is cosplay, is that enough? I just think judge should be a person who cosplays more than fe times and knows how much tears, blood and money people use. They had felt that all. I might be wrong, they might have cosplayd. So yeah.. gonna leave that topic there.

Haha, would it be good if they shared "most scars doing cosplay" prize?

I did had fun day, allthou me and my girldriend did sleep only 3 hours before it. We did stay there only about 4 hours i think, thired and bored we went back home to sleep. Before that we did get some kebab for me and pizza for her.

PPs: If some of the idiots stalkers are here right now, thinking to post something mean about my girlfriend being plus-size(fabulous woman with boobs and bum) cosplayer and eating a pizza, get a life. But if you are not, SEE YOU IN NEXT BLOG!
Lähettänyt Milla aka Ane-ue aka Ane klo 13.12 5 kommenttia:

HELLOOO! So here are some pictures i took at Kitacon. There is not much, but i hope these pictures make someone happy even little pit. I wasnt there the whole time, so there is not much pictures. If you see yourself, feel free to use your picture in deviantart, irc-galleria etc etc.

And here is a very sweet girl who asked my picture, she was so cute! So i had to take a picture of her too.

Milla aka Ane-ue aka Ane
Born 1988 august 6 Loves: cosplay, fashion and food. Lots of it..